In second week of August 2016 we welcomed a couple from Britain. They used our boats to catch pikes and perches in near by waters of our fishing cottage. We also had a very relaxing boating and C&R fishing trips together.

There are very many providers of fishing trips around Europe and Scandinavia, which makes it tricky to know which one to choose when searching the internet.  But on finding Jari at Old School Trolling, I knew we had found the perfect place for our first fishing trip to Finland.  Having grown up around the waters of Lake Saimaa, much of it spent trolling upon them, Jari has the same attitude to fishing, and to life, that we have.  That it’s not just about the numbers, or the sizes, or the varieties, of the fish that you can catch (which are plenty, of course), or about watching the clock and moving on from one fish to the other without much thought to the last ; it’s about living, pure and simple, within the world, and taking the time to appreciate everything about it, and how to protect it for the future; about meeting new people, from different places and hearing their stories, enjoying fresh food over an open fire together, watching sunsets and casting out into the deep indigo midnight.  Jari was a thoughtful, attentive and generous host and we were pleased to have met him.  He knew the waters around his cottage well and his only thought was to help us to catch fish.  He was adaptable according to the weather conditions, which were not always kind to us, and his passion for fishing and the outdoors, and to the lakelands around his cottage, was evident, meaning that our trip was not part of a soulless, commercial venture, but more of a personal, tailor-made trip with a friend.  The cottage is great; comfortable, well looked-after, with every convenience you need, in a perfect setting and, of course, with a beautiful sauna (one of the nicest we stayed in during our trip).  We really hope we can return soon, and will definitely keep in touch with Jari.
Catherine  & Paul


In third week of August 2016 we welcomed a Latvian fisherman group visiting our cottage. Our visitors had great pike fishing, number of fishes caught was varying from 10 to 30 pcs. Many thanks for using selective fishing method, taking some pieces for a food and releasing the rest. 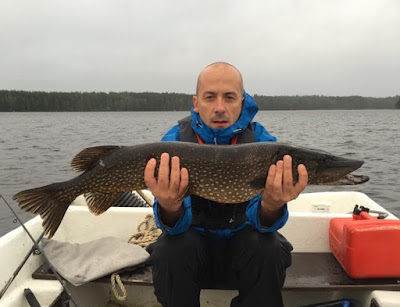 In mid-August I went trolling and spinning for pike, perch, zander and landlocked salmon on Lake Saimaa with two Russian families I knew from previous engagements. We started our first fishing day after 16 pm. with softbait spinning and picnic by campfire. Our expectations were high, as the weather was perfect for spinning: it was calm and warm, with a slight wind blowing from the south.
Our Russian visitors caught nice zanders and perches during their fishing day on Lake Saimaa.

We started our second fishing day after 9 am. with softbait spinning. Perches were passive, but we were able to get several pikes while enjoying the beauty of  the Finnish nature. The best bite was waiting for us after midday. In a period of less than two hours we were able to land and also release a lot of pikes as well as several zanders by trolling. 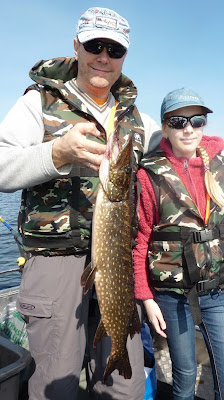 Every time you see something yellow peeking out from the moss on the forest floor, it is worth taking a closer look and making a mental note of the exact spot, as chantarelles tend to grow in groups and in the same place from one year to the next. And better still, chanterelles never accommodate maggots, unlike many of the other delicious types of mushroom. Chantarelles grow in southern and central Finland, and are used to make sauces and soups.

In the end of August 2016 we welcomed a Russian fisherman group from Israel. They have been catching pikes, perches, breams, rudds and roaches by spinning, angling and trolling.....They have also been picking a lot of mushrooms and berries from the nearby areas of our cottage during their fishing holiday 23 August  -  2 September .

In Finland, the use of mushrooms, ceps in particular, spread from across the eastern border. They are not nearly as highly valued in western as in eastern Finland. Finnish mushroom dishes are very Russian in style. Often salted and eaten as a salad, mushrooms are also used to make creamy soups, sauces and casseroles.


The weather in August varied from beautiful sunny days to cloudy and rainy. First we had a family staying at our cottage for two weeks and they did independent fishing on the waters near our cottage, catching good size pikes, perches and zanders. During their stay they really got into jigging, using the boats of our cottage a lot. We also had guided fishing trips on beautiful and warm summer days, catching lots of pikes, perches of over half a kilo and evening-active zanders.

During one guided fishing day we stopped without hurry for a nice break on land. We took our time relaxing, cooking coffee and food on an open fire. The lady of the family took the opportunity to pick mushrooms and blueberries. 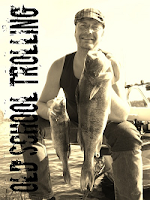 In Finland July and August are the best months for fishing on Lake Saimaa due to warm waters and often very warm or even hot weathers. There are plenty of fish about and you can fish around the clock if you wish, thanks to our light summer nights. Big perches normally move to the shallow waters in mid-July and they can be caught there in the daytime during a period of a couple of weeks. If you do late evening / early morning or night time fishing near our cottage, you will be able to catch zanders and pikes from the shallow waters as well. The best season for night-time fishing on Lake Saimaa continues from Midsummer until the end of August.
Lähettänyt Old School Trolling - Cottage Accommodation and Fishing Trips on Lake Saimaa klo 11:04 PM No comments: