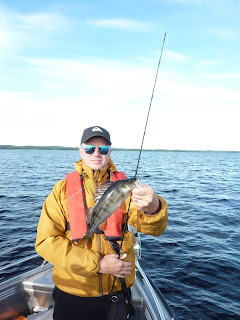 On the second week of August 2020 I had a very important visitor at our cottage – namely me! It is relatively rare for me to be able to have a personal fishing holiday this time of the year. The beginning of my fishing holiday was cold and rainy due to northern wind. I used the first day of my holiday for outdoors work at our cottage. 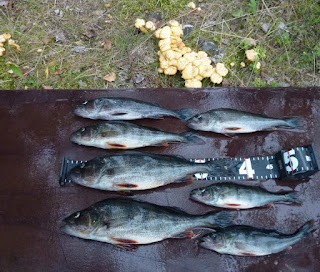 On Tuesday evening I continued with a 4-hour fishing on areas max. 6 km from our cottage. The best time for soft bait spinning was after seven in the evening. With a sonar I found an active bunch of perches 7 to 8 m deep and caught good size perches for cooking during a crazy one-hour bite period. I used 3-inch swim baits with 10 gram heads and the best colours were black and silver which imitate the appearance of our ciscos. My biggest perches were between 35 to 40 cm and the biggest weighed 780 g. This fishing spot surprised me. I have used to catch well there this time of the year, but only when there has been wind from south to west. Now it rewarded me during a cold period of north wind. 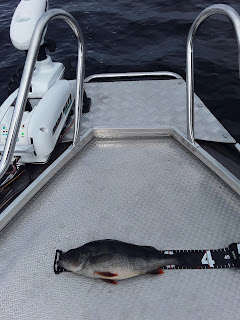 On Wednesday a friend of mine joined me for a 6-hour evening fishing event. I chose a more distant area this time, 20 km east from our cottage. The weather was chilly, but waves were relatively small. In our first spot we caught a couple of small pikes less than 60 cm long as well as small perches. We moved around this area but kept getting the same: small zanders, pikes and perches. Hump after hump the bite was pretty bad and we started feeling cold and hungry. We saw some good size fish in our sonar, but they were totally passive. After six in the evening we started our drive back home and stopped at a spot I were a day earlier. Once again the flock of perches was there and they made our evening. After 30 minutes of fishing we had enough good size fish for cooking and headed home. 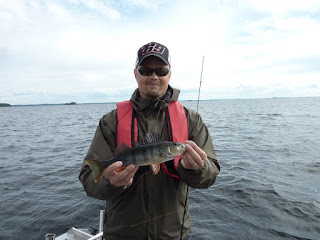 Thursday was a solo fishing day for me. I chose a new area 20 to 30 km west from our cottage. I started fishing after ten in the morning and immediately found good size perches near underwater rocks. The fish were moving fast, which made catching more challenging because they did not stay near my boat for longer than 5 to 10 minutes. I used a sonar to locate fish in deep areas of underwater humps, but found nothing. Long-term north wind had made them move close to shorelines, and so I found small flocks of perches there in areas 4 to 7 m deep. The biggest perch of the day was 39 cm long. The formation of big flocks of big (over 200 g) perches, which takes place every fall, had not started yet. I looked for zanders, too. I went through familiar zander spots 6 to 9 m deep, but they were empty of fish. When I moved to deeper water areas (9 to 12 m deep), the zanders started to appear. They were very picky of the size and colour of the soft bait I used. When I got them right, it was easy to start catching. I caught zanders from 40 cm to a good 50 cm long. The minimum landing length for zander is 45 cm and the allowed daily fish quota two zanders / fisherman, so I released quite a bunch. I got the first zander action about eleven in the morning and kept going until after seven in the evening. 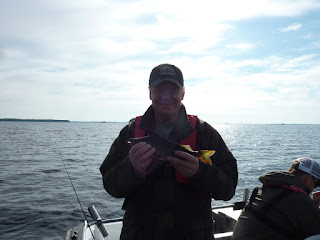 Most of the clients of my company come from abroad. Their priority needs are accommodation, and boats and lures for catching. Many of them fish all by themselves using their own fishing tackle, but we also get many groups that purchase our tutorial fishing trip for learning the best spots, lures and biting times for the nearby areas of our cottage. Quite often they are familiar with spinning, but trolling is a less familiar fishing method for them. On these 4 to 5-hour tutorial trips we go through the basics of fishing methods, the tackle, etc. These tutorial trips are much more challenging than pure fishing trips with a group who are already familiar with fishing on our waters. I repeat the tricks/spots/methods I use until I am certain my clients handle them. If the bite is good, it is easy for them to be convinced that what I teach is relevant. If the bite is not so good during our tutorial, they may remain sceptical. As a result they do not follow the advice and information given, and quite often get much less satisfactory fishing results than they could have. 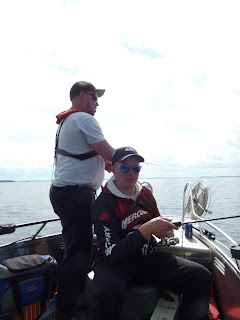 I want to tell you a short story of a successful learning process! A couple of years ago I had a fishing family of five persons visiting our cottage. They had a two-week holiday booked for fishing. When they arrived we went through the boats and the fishing gear as well as fishing spots on the map. I had to return home to Tampere the very same day as they arrived, as I work there during the week. So they fished by themselves for the first five days and when I arrived to help them the next weekend, they were not very happy about the results. First on Saturday we had a relaxing boating and picnic trip together, including some soft bait spinning. The next day we had a tutorial for soft bait spinning and trolling. When I showed them how I fish they said to me immediately that they had been doing it differently. We kept repeating the same manoeuvrers and spots I had strong faith for. Even though the bite was not that good we did catch pikes, perches and zanders. And so their last complete week of vacation became a whole different story. They did great with all species, and they were very happy with their individual fishing results and new individual record fish that they caught on the very same area we had circulated during the tutorial. Quite often people do not understand that a tutorial fishing trip is different from a guided fishing trip. Tutorial trips are all about the learning process, not how much fish you catch. 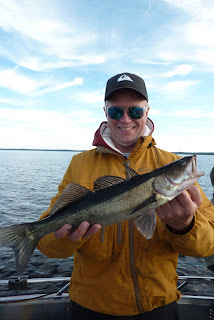 Friday was a guidance day with my old clients from Southern Finland. We’ve had two-day fishing events together every fall since 2018. It’s always great to see this experienced fisherman group again and do fishing together, and each time with them has taught me a little bit more about fishing. For years our target fishes have been perch and zander caught by soft bait spinning only. They have good lures of their own they want to test and use, and it has worked well. They change colours, models and weights of the heads until we find the best combination for catching. Quite often during a normal fishing day there are only two or three colours and models that work perfectly. This year we used relatively small, max 3-inch soft baits for catching perch and longer 4 to 5-inch ones with heavier heads for zander. There were also big differences in the shapes and tails of bodies used for different species. Quite often it is possible to use the same model, colour and even size of soft bait for perch, zander and pike. But if the fish happen to be picky, passive or nervous they quite often require different sizes and models to be caught. Our two fishing days were different from each other in terms of weather conditions, temperature, brightness as well as by the direction of wind and the size of waves. The lure colours that had worked on Friday did not work on Saturday anymore. 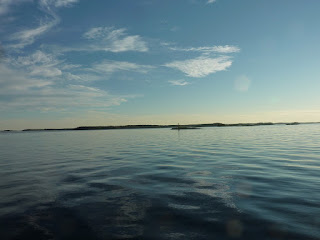 On our first guidance day we had a relatively calm and sunny morning. First the wind was blowing from the north but it got stronger and turned to blow from the west. The beginning of our fishing day was a success, we caught nice perches in our very first spot although the biting period was relatively short. We went through areas that had been lucky for me one day earlier, but the perches seemed to have changed their location. The flocks we saw in our sonar were constantly moving on, which forced us to change location quite often. As the waves started growing bigger it truly was difficult to keep up with the perches. Here and there I could locate them and have good action 20 to 30 minutes at a time. We did find a couple of great spots in which there were both perches and zanders present, but fishing and staying on spot became very uncomfortable due to the waves. As we couldn’t continue fishing as planned, we decided to return to their cottage and continue fishing the next day. Luckily we had been able to catch good size perches and zanders earlier that day. The perches were in average 30 cm long, the biggest ones being almost 40 cm. 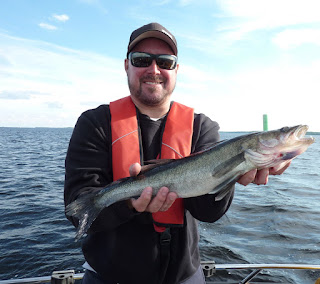 Saturday was our second guidance day and we decided to use most of it for catching zander. The group wanted to go exploring the very same spot that had been our last fishing spot the previous day, but unfortunately it was empty of fish this time. To find them again, we decided to move along with the wind. We located a flock of zanders about 0,5 km north from our starting point. We drove around in circles and used a sonar to pinpoint the location of the fish. After that we chose our anchor spot for spinning. We stayed fishing in this first spot for about 40 minutes, changing our anchor spot a little bit when the fish got passive or moved. Normally these kinds of short changes of spot don’t need to be more than 5 to 10 m. When the fish quit biting for good, we made longer distance changes of several hundred meters and started finding a good anchor spot for fishing again. Pretty much all the spots where we located zanders gave us at least five landings. Did this just happen automatically? Oh no. We needed to work actively to find the colours that were attractive to the fish. In the end we managed to find the colour of the day, as we noticed that there was one colour and one model only that seemed to work everywhere. This time we were able to do evening fishing and it truly was the culmination point of the day. Zanders bit very actively that evening and we had the best action in terms of landings before we needed to start our drive back home with a very happy crew. We took two zanders for each fisherman and released the rest. The sizes of our zanders varied from 35 to 55 cm long, with the average being a nice 45 cm.