In October we welcomed another family of four, this time from Moscow. The son and his parents used our cottage boats for fishing every morning and every evening. We fished together for three days, catching pikes and zanders. The mother of the family was the best in jigging for perches, but the father caught the biggest fish of the weekend during our trolling trip. The son also managed to catch some very nice pikes.


We started October with trolling and softbait spinning for pikes on Lake Saimaa with our Latvian visitors.

The day began windy but turned sunny and calm towards the evening, letting us enjoy the fall colors and quietness of the Lake Saimaa nature. 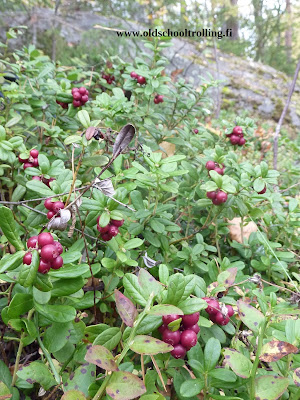 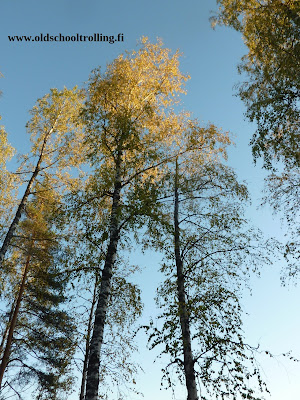 You can easily find both mushrooms and berries from the wild nature of Lake Saimaa during October also. 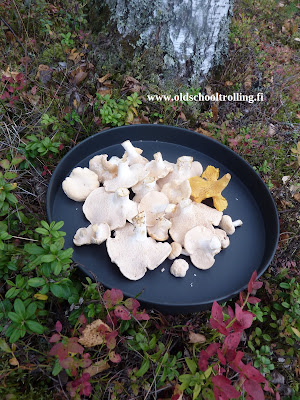 Despite the very cold weather due north wind, our Latvian guests were able to catch 10 to 30 pikes on a daily basis. They selected some of the pikes for food and released the most. They seemed to have really enjoyed their stay at our fishing cottage, because just one week after their visit they made a new reservation for us for June 2016. 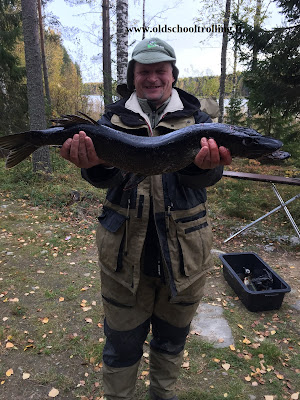 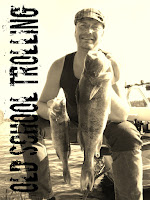 I have been fishing for over 30 years on these waters and I have learned that the period from the beginning of September to mid-October  is very good for pike fishing near our fishing cottage. This is due to the coldness of the waters in the end of September and the beginning of October which makes big pikes hungry and ready for catching. There are also plenty of smaller pikes hunting in shallow water, which makes fishing very active with lots of biting and actual catches. From the mid-October bigger pikes are also moving to deeper water areas to hunt vendace, which have their spawning season from mid-October to mid-November.

During first week of  October 2016 we welcomed a group of six experienced fishermen from the Czech Republic. This was their first visit to Finland and they picked our fishing cottage on Lake Saimaa for their destination. They liked our cottage so much that shortly after returning home they booked a new holiday with us for the autumn of 2017! Our guests were especially pleased with our well-equipped kitchen, our sauna and pike fishing.

The first days of their visit were spent looking for the best fishing spots and the best lures. They caught pikes and perches every day and kept fish of the nicest size for cooking. On the third they they spotted a Saimaa Ringed Seal in the bay closest to our cottage – this was a massive stroke of luck as this fresh water seal is extremely rare!

During the first days of their holiday the wind was blowing from the north, which always makes fall-time fishing challenging. After that the wind turned to blow from the south and the west, which is always better for successful fishing. The last two fishing days were the best for our Czech group: on both days they caught 10 to 20 pikes, the biggest being from 80 to 90 cm in length.


Our Czech guests were very pleased with the fishing of pikes, but felt that fishing for zander and perch was challenging in the cold waters (8 to 10 degrees Celsius). They thanked our fishing guide Jari for all the help he gave in finding the best fishing spots and the most appropriate lures for their holiday of independent fishing on Lake Saimaa.

In mid-October I went trolling for pike, perch, zander and landlocked salmon on Lake Saimaa with a Russian family I knew from previous engagements. We started our fishing day after 9 am. with salmon trolling. Our expectations were high, as the weather was perfect for fall-time trolling and for spinning as well: it was calm and warm, with a slight wind blowing from the south. First we learned how to operate with 10 sets of trolling rods, talked about the best colours and swims for wobblers and spoons, and discussed weather conditions as well as other fishing issues the father of the family was interested to learn. This family owns a country house in Finland and they have been fishing with me a couple of times to learn more about fishing near their cottage.


We started locating flocks of smaller fish and predators hunting them, and eventually trolling took us over 10 km from our starting point. Fish of the salmon family were passive, but we were able to get several pikes while enjoying the beauty of the fall colours of the Finnish nature. The best bite was waiting for us after midday. In a period of less than two hours we were able to land and also release a lot of pikes as well as several zanders. We kept some of the catch for cooking a meal and released the rest. Our most significant landing was a zander of more than 50 cm in length, caught by son of the family. Overall, our fishing day was a success and I enjoyed the company of this nice family very much. 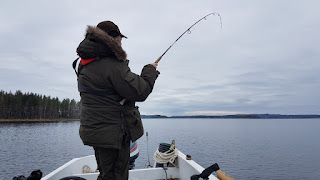 In the third week of October we welcomed a  fisherman group from Lithuanian. The temperatures were pretty similar with the previous week, and the week started dry and semisunny but ended with rain. Our visitors caught pikes, perches and zanders by spinning and trolling.

End of October 2016 on Lake Saimaa

In the last weekend of October we welcomed a charming young couple from France. Before their arrival I had arranged warm clothing, boots, fishing licenses and gasoline for our cottage boat for their use, so it was easy to start their fishing vacation. They successfully started their fishing vacation by spinning pikes near our fishing cottage, had a sauna and a good night sleep before our guided fishing day together.

We had a combined spinning and trolling day together near our cottage. The morning was cloudy, which made the weather feel cold, so we definitely had use for warm clothing. The beginning of our fishing day was quite difficult. Every time we stopped to do spinning, we were able to catch one or two pikes or perches, and this is why we changed fishing spots fast. After midday pikes started to bite like crazy. We were able to land and release several pikes in a period of less than two hours. We ended our fishing day before sunset and we all seemed to be happy with our fishing day. A couple months later our French couple made a new reservation for the summer of 2017 and sent us these regards: ”We are so excited to come back and see the cottage and the lake during summer time!!!”

It is totally forbidden to fish any landlocked salmon during period 1 June -  31 August on Lake Saimaa area.

Good fishing season extends from May to beginning of June before the waters really warm up. The best season for catching both landlocked salmon and brown trout last from October to November, when the water temperature has fallen to 10 degrees and below. At that time, lanclocked salmon most often bite at the surface or max 6 meters deep from the surface.

To learn more about sustainable fishing of these species on Lake Saimaa, you can visit the website: