We began our winter fishing season of 2016 with ice fishing of rainbow trout with a Russian group. We started to set up rods for active and tip-up fishing in the morning even before sunrise at a truly wintery temperature of -15 degrees Celsius. The rainbow trout kept biting evenly throughout the day, with the afternoon hours being the most active time. Naturally the day's schedule included a relaxing coffee and lunch break by a lovely open fire. Our biggest catch was a rainbow trout of 2,4 kilos. In the end of our fishing day, temperature was -22 degrees of Celsius. Hot sauna finalized this cold fishing day.

The end of January is burbot-catching time in the area of our fishing cottage. In the beginning of burbot season the fish can be found from waters deeper than 10 metres. When the spawning season starts, the burbots come to the shallow water areas, to depths less than 1,5 metres. We catch burbot by using large spoons or ice-fishing jigs with fresh bait.

The first part of January is also good for catching pikes by active ice-fishing and “ismete” fishing methods. In “ismete” ice-fishing we use fresh baits for catching pikes. By Finnish fishing law active ice-fishing is free of any charges and licenses (with the only exception being special license areas for rainbow trout fishing, for which you must buy a license). For using the “ismete” method you need to purchase a license by paying the fisheries management fee of the Finnish state for one rod and lure. By regulations you must also stay near your “ismete” gear on ice while it is in water, not leaving it alone and not letting it out of your sight while fishing. Combining “ismete” and active ice-fishing methods is a very interesting way to winter-time fishing for pike.

Around mid-March the fish start moving back to shallow water. I did some test fishing on March 18th near our Fishing Cottage and the results were pretty good. Although the best possible bite hadn't yet started, I was able to catch fish all day long in a sunny, warm weather. Our springtime ice fishing season will only get better and and better in the next 2 to 3 weeks from now.


On March 21st, we had a nice ice fishing day for rainbow trout at Enonkoski with a Russian father and son.

On the day before there had been a big ice fishing competition for rainbow trout, namely the Finnish Championships with over 560 competitors. Fishing had not been good: only 56 competitors managed to catch any fish, and the winner got three fish in total.


This was not very promising for us, but we had good feeling about fishing. And our instincts proved right: we caught our first 2-kilo trout as we were only starting to set our tip-up gears down to water. Our young client Dima lifted the fish from the ice hole and our guide Jari helped him land it. A great start for our relaxed, sunny fishing day!

Our next fish was caught also with tip-up gear before midday. Sharp-eyed Dima noticed the flag, which indicates bite, and soon the fish was landed.

We took a break to have a nice picnic by campfire in the middle of day. When we resumed fishing, we had our last trout action at about 3 o'clock in the afternoon. This time the trout bit into one of Jari's special ice fishing jigs, but the fish was too strong and broke free after a 10-minute battle.

The day was quite difficult for active ice fishing, but still we were able to create action and contacts with the fish. The final result of our sunny day on ice: two trouts and three happy fishermen! 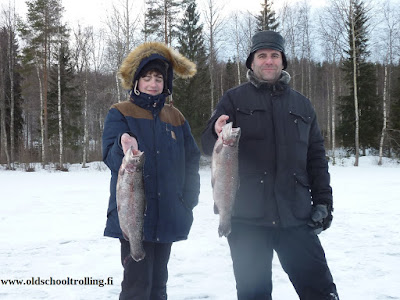 During Easter holidays 2016 we did ice fishing for perch and roach. In the beginning we still had 5 to10 cm of snow on ice and a lot of small perches and roaches up to 100 grams to catch near our Fishing Cottage. Then the weather changed for warmer, melting the snow, and a couple of days later we got clear ice. 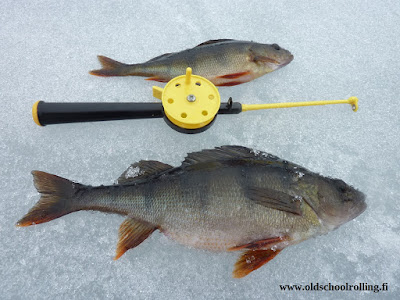 Our Fishing Guide Jari Kayhko did ice fishing in a radius of 3 km from our cottage by foot as well as in a radius of 30 km by car. He went through traditional angling places, known mainly to local ice fishing enthusiats. His catches were good every day in the morning and evening time. The caught perches were between 50 and 600 grams in size. As the weather was warm and sunny, making it easy to walk on ice, the conditions were perfect for having an enjoyable Easter time ice fishing holiday.


If you are planning dates for a icefishing holiday for the year 2017, I would like to recommend dates from 27 March to 9 April 2017.

At this time of the year snow has melted from the surface of the ice, it is easy to walk on ice and the fish are biting very well. Spring time sun is warm and sunny days are excellent for icefishing. 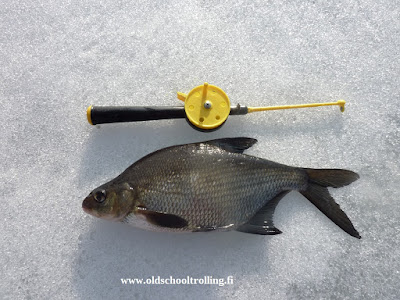 Near our cottage there are very good places for icefishing, which you can reach by foot. There are also excellent icefishing places in a radius of 30 km from our cottage, which you can easily reach by car and which I can recommend to you. I have created maps / introductions of icefishing targets and spots for the use of renters of my cottage. This way you can try catching very big perches as well as pikes by icefishing by yourself. 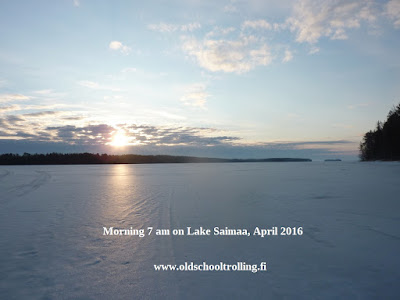 In Finland, Santa might also be known as Joulupukki! (This really means 'Christmas Goat' as it was traditional in Finland that there was a Yule Goat who was scary and asked people for presents - and certainly didn't give any out! Over time the goat became the gift giver and then Santa took over the gift giving duties but the name of the Christmas Goat was still retained in Finland!) Joulupukki rides with reindeer leaves gifts under the Christmas tree but if you have been naughty you could end up with a bag of coal!

Christmas Eve is very special and the most important day over Christmas. It's traditional to eat rice porridge and plum fruit juice for breakfast. Then the Christmas tree is decorated. Most of finnish people like a relaxing sauna on Christmas Eve.  The main Christmas meal is eaten in the early evening. Lutefish (salt fish) is the traditional starter, but is not so common nowadays. The main meal is a leg of pork served with mashed potato traditionally baked slowly in birch-bark boxes in the oven with similarly cooked mashed swede. Casseroles containing different vegetables including, rutabaga, carrot and potato are also common. Cured salmon is very popular and some people also have turkey. Desert is baked rice pudding/porridge eaten with spiced plum jam. One almond is hidden in the pudding. Whoever find the almond will be lucky for the next year. 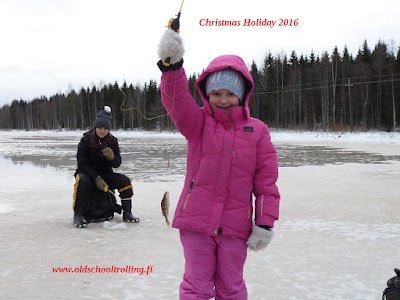 I did ice-fishing with my family and with my sister's Brazilian friend Luiza, at our fishing cottage Jokiniemi at 23 December 2016. All the fisherwomen caught plenty of fish, but Luiza and the smallest girl caught the most..... So we had many happy fishing ladies here today. We did finalize our fishing day with a picnic by campfire. 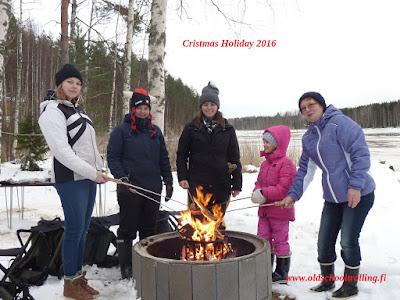 On the last day of the year 2016 I did some “ismete” ice-fishing for pikes. First I caught some roaches and perches to be used as bait. After that I hooked an “ismete” rig for catching pikes. An “ismete” rig is formed of a metal leader and two pieces of single or triple hooks. I adjusted the hooks into the mouths and sides of the dead bait fish, and set a small line weight of 20 grams on to the line, to a distance of 40 cm from the bait fish. By using removable line weights I can freely adjust the free length between the weight and the bait fish. Then I dropped my bait fish and line weight combo through the hole to the bottom and attached the line to a bite indicator. Now I was able to hear and see when the fish were moving or eating my bait fish. It is important to adjust the break of the “ismete” gear to be loose, otherwise the fish can feel friction, become suspicious and spit the bait fish out of their mouth before hooking. The basic idea in “ismete” fishing is to allow pike to swallow the bait and then strike back to get it hooked, so you need to wait for a while before you make the strike. Quite often pikes turn the bait around in their mouth first, so if you strike back for hooking too early, you will loose the fish.

I started my fishing day after midday and continued it until dark. Smaller fish were biting well after midday, but I needed to wait until dark to get my first fish. It is normal that times of dusk in the early morning and late evening are the best for “ismete” fishing. If you start fishing early in the morning, it is a good idea to set your gears down before sunrise. We have several “ismete” sets available for the use of our cottage guests, if you are interested in trying ice-fishing. You can get good advice and tips for fishing spots from our cottage owner and fishing guide Mr Jari Kayhko. 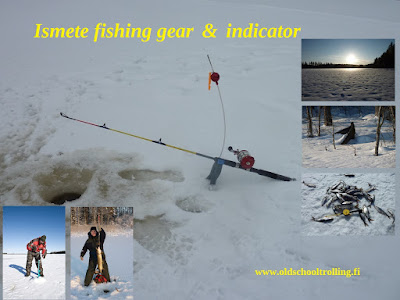 In “ismete” fishing we can select the fish we want to keep for cooking and release the rest, as we do in open water fishing also. We lift the fish from the hole by line or by inserting our fingers under the gill cover (lip lock move). We do not use a landing hook in case we want to release our catch. When the fish is landed, we put it into a water-filled vessel (a plastic sledge or box) and use pliers to remove the hooks. If we want to release the fish, we measure and weigh it before putting it back to the lake (there are specific weighting bags for this in shops).

For “ismete” ice-fishing you need to purchase a licence by paying the fisheries management fee of the Finnish state. According to the law the rod must be at least 1 meter long (typical “ismete” rod is 1.2 meter long). In the law there are no specifications for the reel, so we are basically using bait caster reels instead of pulling the fish up by grabbing the line with our hands. With this licence you can use one “ismete” set per fisherman.

You must notice that for using tip-up ice-fishing gear you need two licences. 1) the fisheries management fee of the Finnish state and 2) the bait fish licence of the local water area owner (“iskukoukkulupa”). Every single unit of tip-up gear needs to have their own licence. It is often quite difficult to find sellers for these local water area licenses, so I prefer “ismete” fishing more.