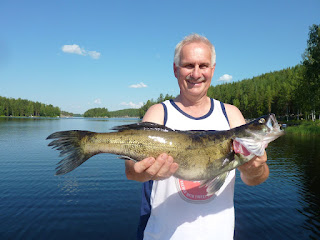 I was having a personal holiday week 12–18 July, which also happened to be one of the hottest weeks of our summer 2021. Because of this I was planning to do fishing early mornings and late evenings to avoid the hottest parts of the day, which peaked at over 30 degrees of Celsius. I got a last minute booking for a guided fishing from a Finnish–Estonian family who had rented a cottage from Savonranta for that week. They had also invited family members from Switzerland to join them. 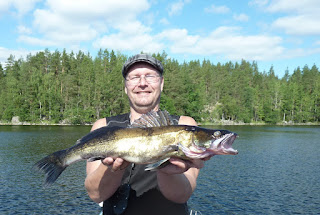 I started preparations for their fishing event by having two training days so I could locate the fish, find the right biting times and determine the best colours for soft bait spinning. During my first training day I started fishing after noon and found a good area for zanders immediately. The fishing was good at 14, 17 and 19 o'clock that day. Catching was easy,: I only used one colour and one type of soft bait all day while using a sonar to locate areas and doing some test fishing. There was some action all the time and the biggest zander caught was appr. 65 cm long that day. I took one fish for cooking and released the rest. My first fishing day was windy, which made it possible to do fishing during even the hottest parts of the day. 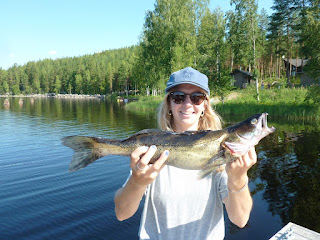 The next morning I started fishing after 6 o'clock in calm conditions. I was expecting the bite to be as good as the day before, but I was wrong. There was great fishing between 6 and 7, but after that it got harder and harder to do catching as the sun got extremely hot and there was no cooling wind. This time I was forced to change soft baits all the time to be able to find the colour that worked. The biggest zander caught that morning was appr. 60 cm long. I also caught medium size pikes and perches. 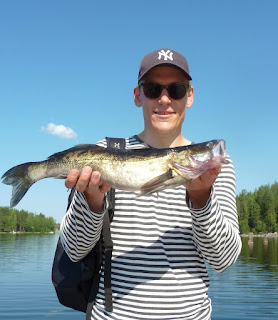 My Finnish–Estonian group wanted to start their fishing event early in the morning. I woke up before 4 o’clock to to do all preparations and drive to their cottage pier before 6. My group was there exactly on time and we could start fishing 30 minutes later. First I demonstrated them a technique for soft bait spinning and while doing it, there was our first zander hooked. After landing the fish my group started to do fishing by themselves. We caught a couple of perches and pikes, but were unlucky with zanders which dropped before landing. The first 30 minutes we had good action, but after that the fish lost interest in our lures. I decided to change location by doing some trolling and giving them a short introduction in the method. We caught a couple of pikes and zanders while heading to our next hot spot which I had found earlier. When we started seeing a lot of zanders lying near the bottom we changed to soft bait spinning again and the best part of the day was ready to beginning. The trick was to change lures and colours all the time. This way we all caught good size zanders, the biggest being 65 cm long. But the sun started to scorch so hot that we decided to do some trolling for pikes and zanders before driving back to their cottage after 10 o’clock. It was a great, but also challenging half a day of fishing in great company. 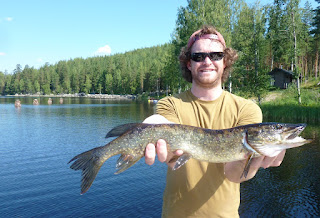 After three days of fishing I decided to have a day on land and headed in to the city of Joensuu to do some shopping for fishing gears and food supplies. I used to live in Joensuu for almost 10 years, this is why I prefer visiting Joensuu instead of the beautiful summer city of Savonlinna, which is 20 km closer. Talking about distances, my home and family is located in the city of Tampere, which is 370 km from our cottage. My business trip takes appr. 5 hours to drive one direction.

Early evening that very same day I decided to invite my old client to join me for morning time zander fishing. We met before 5 o’clock at my cottage and headed out on my boat to our fishing area. We had the same kind of weather conditions and fishing as the day before. We had to keep changing the colours all the time to get the fish interested and had action all the time, but it was nothing too special. We did good catching in a sunny weather and the growing wind made it comfortable to stay under the sun. After 9 o’clock the bite got worse and we started our drive back home. There were a couple spots on our way I still wanted to test, and the very first one, a lonely hump in the middle of the lake, was a jackpot. We spotted some zanders in our sonar and stopped to try them. Crazy biting started immediately and lasted for almost an hour. We realized we had found a bunch of actively hunting zanders, with medium size over 50 cm long. The biggest zander was 65 cm long. We both kept two fish for cooking and released the rest. What great zander fishing it was all week long, in extremely hot summer weather. 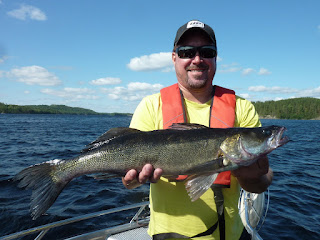 How Did COVID-19 Effect My Business?

Old School Trolling has focused mainly on international visitors for over ten years, and the number of Finnish visitors has always been low. The end of 2019 and the beginning of 2020 was looking good: my company had more pre-bookings for accommodation and guided fishing trips than ever. But then came COVID-19 and changed all that. Because nearly all travelling was banned, I got a lot of cancellations or tried to reschedule booked fishing holidays. Unfortunately it was possible to travel here from the Baltic countries only during the summer and fall 2020. Basically the reduced number of clients we had were coming from Lithuania, Latvia, Estonia and Finland.

But there is always something good in a bad situation as well. I had to start working full-time in construction business and I am now taking care of my fishing base as a part time entrepreneur. I am doing well with the combined incomes of my regular work and my company sales. I have also been able to have personal 7-day fishing holidays during the summer season for the first time in over a decade. This arrangement is working so well I will keep it up. My clients make pre-bookings for guided fishing trips at least 3–4 weeks in advance, which gives me time to ask for a few days off from my regular work to be able to organize the fishing event. This is what my regular clients have been doing for years.

Lake Saimaa was free of ice on the last week of April. I was able to have a long weekend from work for personal fishing in the beginning of May. I arrived at our cottage on Thursday 29 April to prepare my boat and equipment for the start of the open water season. On Friday I started our 3-day fishing adventure with my dear old mother, who also likes to fish.

On Friday morning we did some spinning with spoons and spinners on shallow water areas, less than 2 m deep. The areas seemed to be empty of fish, because we did not get any contact. We had a little coffee break at our cottage and continued with soft bait spinning at 11 o’clock on a deeper water area, of 4 to 9 m deep. I located an area in which we had a big flock of small fish and predators chasing them. Most of these active predators were pikes without roe, but there were also perches preparing for spawning. We caught several pikes during the next 4 hours. The biggest one weighed 4.9 kg and was caught by my mother. She was very proud of her first catch of the season.


After midday we had a short lunch break and I continued with trolling and soft bait spinning after 17 o'clock. I located areas that looked very promising, but the fish lying down at the bottom were too passive for any lure I offered. The air was cold, only 4 to 7 degrees Celsius, and the water was 2 to 3 degrees. The wind was blowing from north during all of our fishing days.

Saturday was more windy and colder than the semi-sunny Friday, with the air varying between 0 and 4 degrees Celsius. The previous night the temperature had dropped below freezing and in the morning we even had some snow falling from sky. We started our fishing day at 10. and caught all our fishes by soft bait spinning between 11 and 14 o’clock. We had bad luck with pikes, with us both loosing bigger pikes than the biggest we caught on Friday. We mostly got perches, with the heaviest one weighing 360 g. Perches had not spawned yet, so we decided to leave them alone and release the ones full of roe.

Sunday was the worst fishing day of all. We had only a few hits of perches and got no pikes at all. The weather was sunny and comfortable for fishing, but the long-term north wind had made the fish extremely passive. But we may have tried to fish too early, from 8 to 11 o'clock, before we had to leave the cottage. On our previous fishing days the best bite seemed to start after 11.

It was great to do some open water fishing after a long and cold winter. The pikes were of good size, even though we did not catch giants of 10 kg or more this time. Quite often it is difficult to do good catching right after the ice has melted, but we did great. Natural colours such as perch and cisco, as well as yellow, orange and purple worked well. Soft baits used were 2.5–4 inches long and hooked with 7–10 gram heads. Pretty much all the fish we found were at 6–10 m deep. This time of the year you must have the patience to locate the fish and then wait for the relatively short biting period to start.

Here you can find more early season fishing reports of our cottage visitors!